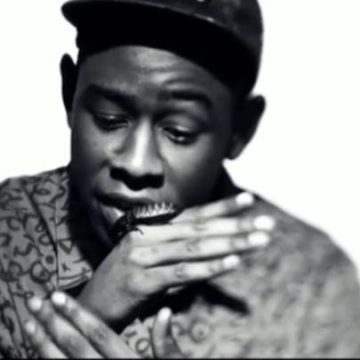 When the Los Angeles based hip-hop collective Odd Future gained serious worldwide attention in 2011, it was due to OF frontman Tyler, The Creator’s creativity. He dropped the music video for “Yonkers”, the first single off of his first studio album, and ever since he and his fellow OF members have been at the center of the hip-hop world. Overall, Tyler has released two studio albums, Goblin (2011) and Wolf (2013) as well as his first solo project, a free album called “Bastard” that he released in 2009. He was also instrumental in Odd Future’s four collective projects. Since beginning his career, he has collaborated predominantly with OF members like Earl Sweatshirt, Hodgy Beats, Domo Genesis, and Frank Ocean. He has collaborated outside of OF several times, including working with Game, Casey Veggies, Pusha T, Mac Miller, Pharrell, and DJ Drama. He has also developed a close relationship with Kanye West, who made a surprise appearance at OF’s carnival in 2013. Tyler performed at the YouTube Music Awards in 2013. He made headlines when he called out YouTube in explicit fashion, on the red carpet of YouTube’s own show. He later explained that he believed YouTube had an opportunity to showcase talent and creativity in its’ nominations and failed to do so. Tyler is an outspoken guy, and respects true talent and creativity. He has not announced plans for his next project, but he is likely working on something, whether it be rapping, producing, or filmmaking, that will drop in 2014.