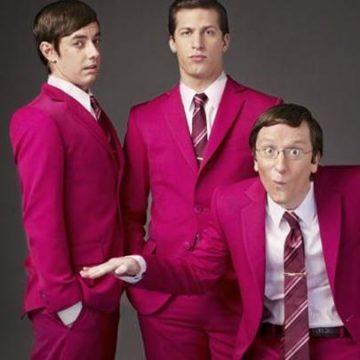 The Lonely Island is exactly The LOX or Mobb Deep in terms of rapping style, but the group of Berkeley-natives is a hip-hop group known for using comedy in their music. The three group members met while working on Saturday Night Live and began their music career in 2009. The Lonely Island has released three studio albums – the first of which, “Incredibad” featured the viral hits “Jizz in My Pants”, “I’m on a Boat”, and “Dick in a Box”. Their second album “Turtleneck & Chain” was nominated for an Emmy as well as a Grammy for Best Comedy Album.The group has collaborated with several notable artists and actors including T-Pain, Justin Timberlake, E-40, Michael Bolton, Snoop Dogg, Kendrick Lamar, Adam Levine, Danny McBride, Pharrell, Billie Joe Armstrong, Akon, Jessica Alba, Tegan and Sara, Elihah Wood, Zach Galifianakis, Norah Jones, Nicki Minaj, and various others.Their song with Tegan and Sara called “Everything is Awesome!!” appeared in the 2014 movie The Lego Movie. The trio has yet to announce plans for an upcoming project, but stay posted as they are due for something soon.