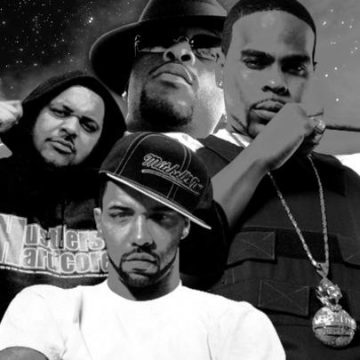 Slaughterhouse is a “supergroup” of lyrical emcees consisting of Joe Budden, Joell Ortiz, Royce Da 5’9, and Crooked I. They were formed in late 2008 after Crooked I, Joell Ortiz, Royce da 5’9″, and Joe Budden appeared on the song “Slaughterhouse” from Joe Budden’s album “Halfway House”. They then decided to join forces and release their debut album, “Slaughterhouse”, back in 2009. With talks of a major label to come into the picture, Slaughterhouse elected to sign with Eminem and Shady Records in 2011 and released their second effort “Slaughterhouse” EP. They’ve since worked with Eminem, Skylar Grey, Yelawolf, LOX, Swizz Beatz, Cee-Lo Green, Busta Rhymes, and many more. In May 2013 Slaughterhouse announced that they had put their solo projects on hold, and had started recording their third studio album “Glass House”, which is expecting an early 2014 release date.