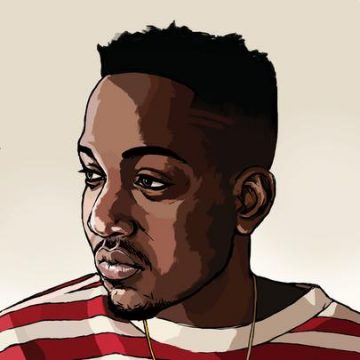 Although Kendrick Lamar is hardly new to the rap game, it was only recently that his career skyrocketed to an international level. It started with the merging of his home label Top Dawg Entertainment (TDE) with Aftermath Entertainment and Interscope Records in March of 2012. He quickly became a household name after coming under the mentorship of Dr. Dre and releasing several huge singles. His debut major label studio album good kid, m.A.A.d city was dubbed a potential classic before it was even released, and whether or not it’s held up to that title, it’s sold more than a million copies since its release on October 22, 2012, and has been universally acclaimed. As most of you know, he’s a quarter of TDE supergroup Black Hippy, alongside ScHoolboy Q, Ab-Soul and Jay Rock. He’s also collaborated with a diverse range of artists, from Meek Mill, Mac Miller, The Game, J. Cole and Pusha T to Bridgette Kelly, Miguel, Adam Levine, Chris Brown and Mayer Hawthorne, and has graced the cover of countless magazines. Expect a new project from the kid in 2014.