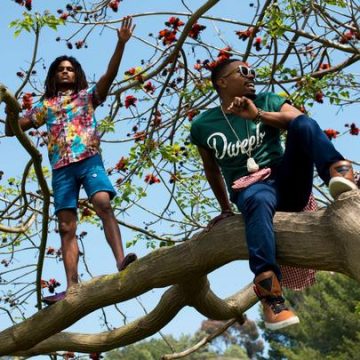 For those unaware, BEeFF are an emerging Californian rap duo at the forefront of the #FAKEWORLD movement, consisting of members BC (Bertran) and Evan. They’re also directly affiliated with fellow Golden State emcee MANN’s PeaceLife collective, and are known for their “hyperactive image, energetic songs and off the wall imagery”. The last we heard of BEeFF (or first, rather) was their debut self-titled EP, which includes guest appearances from Tone Oliver, Issa Rae, Jetpack Jones, Marvel The Gr8, enimaL ThYrd, Alexander Mac, Chazz Giovanni and MANN, as well as production from BEeFF’s BC, frequent collaborator enimaL, TRS10, Dari The Spazz, Martamius and more. The project was preceded by the mixtapes Leaders Of The Fake World and All Style, No Substance. Stay tuned for the further adventures of the Leaders Of The Fake World – they’re just getting started in the rap game. (For more information, hit up addicted2dope.com and / or thepeacelife.com)